Some dear friends from church had a little welcome baby party for Grey on Saturday. It was so fun! We had a little drama getting there, our radiator has a crack in it (which was discovered an hour before party time), so we had to borrow a car to get there, but we made it! All the kids had a blast playing together. I should have snapped a picture of how filthy they all were, it was hilarious!

Right before we left - fussing 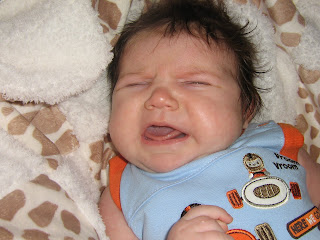 He's such a big boy! I still can't get over it! 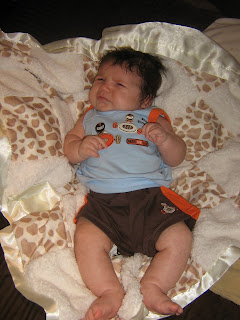 The cakes they had for Grey, and the others too! Grey's said "Welcome to the world" on the top, Kenna's said "Congratulations Big Sister" on the top and Brooks' said "Happy Birthday Big Brother". It was so cute! (and delicious) 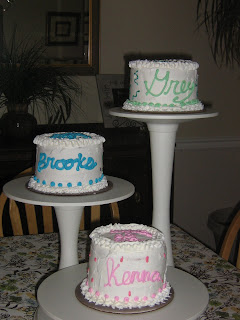 We were given a TON of diapers, which is soooo awesome!! I am very grateful for that gift, cause we always need diapers! Then I was given a tell-tale turquoise box...of course assuming that someone was reusing their Tiffany & Co. box. The card on top had a certificate of authenticity in it...so I knew it wasn't a recycled box!

Here is the adorable elephant piggy bank (that no children are allowed to touch!...ever!), from Tiffany & Co (he's sitting in front of the lid to that gorgeous box!). Grey was also given a "it's a boy" 1oz silver dollar to go in the piggy bank. 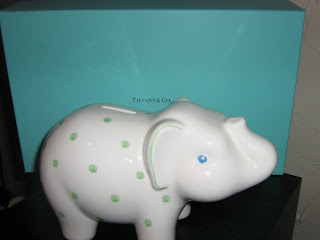 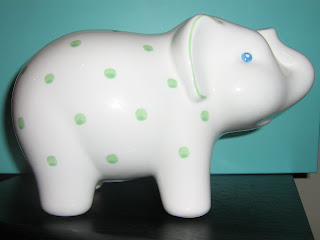 Kenna and Brooks were also treated to gifts (thank you everyone!), which of course, they were not expecting. Brooks got a V-Tech computer (which he is in love with!, no more Barbie computer for him:-), and Kenna got a very grown up big sister gift, a digital camera. It's definitely a simple user-friendly one, but it's not for kids (it's not drop proof etc), she loves it and is very careful with it. We've gone over all the rules about it. She carries it around her wrist and has been capturing life as she sees it, since yesterday afternoon. I have a feeling we will be burning through lots of triple A batteries!

We are so grateful to everyone for being such good friends, and so kind and generous to us. Thank you all! We had a wonderful party!
Posted by Darla at 8:46 AM