We have a little family tradition, dubbed "Special Day" by Kenna after she had her first Special Day...which consisted of going to Home Depot with Brian to order something for a job, and then he got her a Sonic drink. She loved the outing so much, she referred to it as her Special Day, and simply couldn't wait for another one. This was probably about 9 months ago, and she will still talk about it all the time! Brooks got a Special Day recently when he went to the Gun & Knife Show with Brian and Poppa. They love their Daddy dates, which really aren't that spectacular, just anywhere they get to go with Daddy alone! It is actually a little difficult to plan these Special Days, since Brian works usually every Saturday. So we have to capitalize on the ones he has off!

Since we needed a new fish, and I am NOT interested in getting or transporting the horrid thing, I thought it would be a nice father/daughter thing to do. We thought it might work out on a certain day, but didn't. She would randomly say throughout the days that followed "(Sigh) I guess I'll never have a Special Day" Haha. So dramatic! Two weeks ago, it finally worked out to get the fish! Brian and Kenna went to lunch at Tropical Smoothie "and we got a cookie, and a smoovie, and a quesadilla, and then we got Sushi and spring water"...and then to Walmart to select another beta fish. She discussed maybe picking another name for him, other than Sushi (the second), but ultimately thought she liked Sushi the best.

They did a nice job picking him out, I think he is much more beautiful and colourful than the old Sushi. 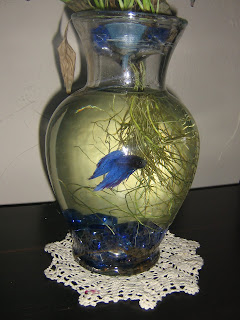 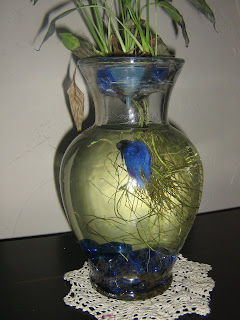