Of course I have to document this once a year occurrence each time it happens. If for no other reason than to provide a good laugh for all the northerners! So here goes...apparently we had quite the storm last night :-D It certainly did get cold, I could feel that part! The kids were so excited to see snow this morning, Kenna declared she was going to go out and make a snowball. Lol. I told her that really wouldn't work too well...but she could make one at Grandma's. Well she started going on and on about all the great things she's going to do in the snow at Grandma's house...we'll see! I tried to explain that it's not like here...there is lots of snow, but it's also very cold, so you need snowpants, hats, mittens, scarves, and the snow is very deep so it's a little hard to walk etc. Of course they have no concept of any of that, and for now, are we're going with the idea that they will love it. I have my suspicions that after 2 minutes of THAT kind of cold, they will be singing a different tune. (Haha! They are "freezing" here just walking to the car!) It's hard to imagine when you've never seen it (that you remember, they saw a blizzard in ON in 2008, but don't remember it)

Look, snow on the car! 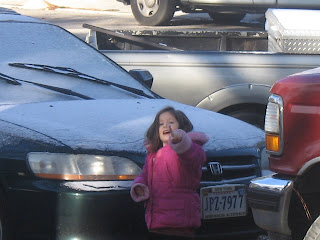 Rushing out to play before church (while still in the process of getting ready actually, they just couldn't wait...Brooks ran out without shoes on until Brian saw and stopped him!) 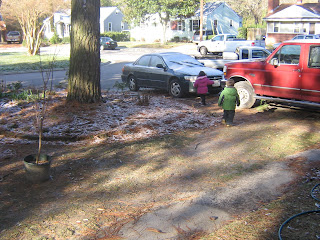 They had to touch it 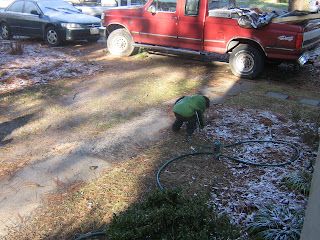 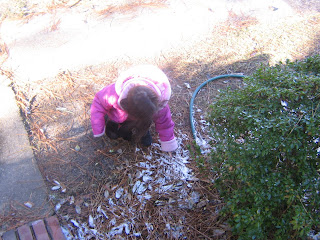 Around here, this equals snow "sticking" of course it was melted in no time, but it did stick while the sun was down, so I guess that counts:-) 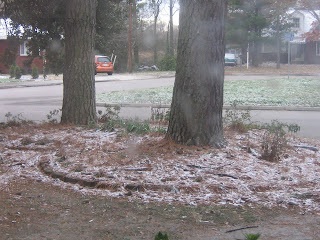