...no, not pics of me in my bathing suit, (ha ha), an ACTUAL beached whale! It died and washed up onto our Oceanview beach. Here is a link with some video about the whale . It was a 42 ft sei whale (or fin whale?, conflicting reports, I don't know anything about whales)

Tiffany, Ardyn's mom got Ardyn early, and took Kenna (only one not napping at the time) along with Jack to see the whale, as they were preforming a necropsy (marine life autopsy), and burying it (it washed up on Sunday, but I didn't hear about until today). 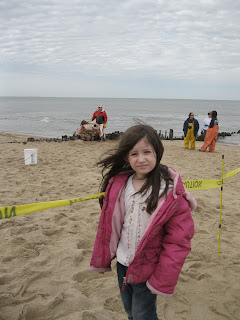 I didn't think it smelled bad but Tiffany and Jack said it smelled disgusting, but I guess I have a nose stuffed.
We saw the brain. It's red and it's huge and it's cut. And they put it inside a zipping bag, so then they hooked the skeleton. 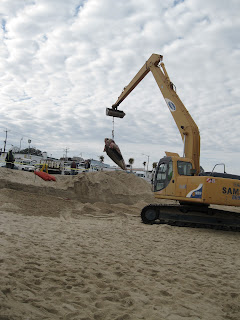 They buried it in the sand so so deep
They are scientist-es, so they're gonna take the mouth to their own aquarium I think. I mean, I'm not sure about that, I just think it. But Miss Tiffany said that was prolly what they'd do about it. 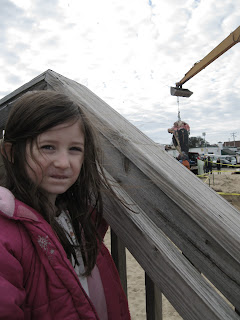 ******
So her first experience seeing a dead animal was a positive one, and she wasn't grossed out! Perhaps we have a marine scientist on our hands:-)
Posted by Darla at 3:24 PM