Most people don't know where to start - there is an infinite amount of money you spend at Michaels on cardmaking or scrapbooking supplies. But you don't need everything. Only really a few key items will give you SO MUCH versatility and usefulness. I am listing my top picks for cardmaking/general crafting. This list would be a little bit different if you are more into actual scrapbooking.

1) Designer Paper. Suggestion: buy a "pack" of it, that is double sided, and all the colours coordinate. Stick with these colour themes, so make sure you pick something you love/with broad appeal. (Ie: colours include, purple, blue, green, white)

2) White cardstock. This will be the background/actual card, so make sure its a stiff lb of paper. Stampin' Up sells 80lb cardstock, which is just perfect, but harder to find at Michaels

3) Coloured cardstock. Suggestion: get one or two shades of cardstock, that will match with the paper you've selected. Perhaps opposite spectrum (male/female colours, like a purple and a blue)

6) 1 or 2 very multi-purposeful images (stamps). Suggestion: A large flower set, or something with geometric shapes. Something you can invision working for a ladies birthday card or a thank you card, or a thinking of you card, etc.

8) 1 or 2 shaped punches. Suggestion: a scallop circle, a basic flower, or a circle

9) 1 set of markers (crayola/crafting/anything) OR a few coloured ink pads. Suggestion: start with red, green, blue, purple. Either stamp your images in colour, or colour in an image stamped in black or brown.

10) A few small "3D" embellishments. Suggestion: a packet of buttons, or coloured brads, or a spool of thin twine

TIP: Don't buy a "words" stamp set, until you are very sure you will use it. It is very easy to pick a cool font, print off any wording you like, cut out, "frame up" on coloured paper, and adhere to card.

Believe me, you can make unending amounts of things with just these few supplies. It will keep your husbands happy that you aren't blowing all the discretionary money too:-)
Posted by Darla at 1:53 PM No comments:

There are two people I know, going through incredible hardships right now. They are blogging about their journey and the beauty Christ is revealing to them through their trials. Check out their stories, commit to pray for them, and their families, and be encouraged in the Lord, as we witness the wisdom and grace He is giving to these remarkable ladies.

Sarah (Life & Grace) - Sarah is a personal friend of mine, (remember this baby shower?), who is walking through one of those moments in life you hope you never have to face...her precious baby Evie, due in November '12, has a condition that will - barring a miracle - take her life shortly after her birth. We are praying hard for that miracle. But also praying for God's best and His peace. Join Sarah as she writes about the ups and downs of her journey, and commit to pray for her, and baby Evie, every time you think of them.

Fawne (Beauty in Weakness) - Fawne is a remarkable young woman that knows my family, in Alberta. I have met her only once, when Kenna was a baby, and her son, Wyatt - born with handicaps and has since passed away - was also an infant. Last week, she lost a baby at around the halfway point in her pregnancy, and her journey and insight will both make you cry and make your heart soar. (She's been writing for awhile, you will love what you find as you hop around her blog).

I am heartbroken for these girls, and the pain they've endured already in this life. I do wish these were not their stories to tell. I wish that life for them (and all of us!) could be free of the pain of losing a child. But I know there's something in it for them (and me). I don't know why God allows these things to happen and shape our lives, but He is good, and He is great, and He is able to bless beyond measure, regardless of the wreckage we see laying around us. I'm praying hard for these families, their fragile emotions, and am blown away at the beauty that is shining through, as gold. That is something only God can do.
Posted by Darla at 1:01 PM 1 comment:

Just a few summer moments I captured on my phone...

And the end of summer... We have all the extra kids back now! Yesterday, we did leftover pizza for lunch, and had a perfectly coordinated naptime x6. Yay! We are not starting school yet, partially because I like to give it a week or so for everyone to get used to a new routine, and partially because the school books I ordered from BJU a few weeks ago have not arrived yet:-) 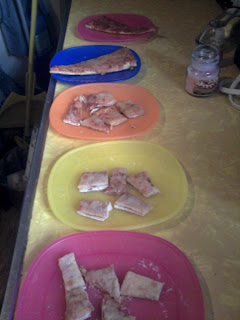 We had friends come through town on their way south last Thursday. We are at a good stopping point to break up a long trip with kids (hint hint to anyone heading south from Ontario / New York areas:-). Well anyway, these are *my* friends. I met them in Chicago, while working for the Advanced Training Institute - they were working there too. So was Brian. I thought for sure he had met them...I was there from 97-01, Brian was there in the Chicago location starting in 99...I guessed he missed meeting them, they left and got married in 99.

Of course I welcomed them, and their 5 kids...and when I get off the phone, Brian says "will I like them?" lol! No way! I thought for sure he knew them! Too funny. Well, he did like them (how could he not? We know the best people from there!), and we had a great night talking and reminiscing. All the kids got along famously!

Missing from the pictures are David & Erika of course, and then their two littlest, Aidan & Gavin (and Grey).

We had a great evening, next time, we need to plan for a longer stay!
Posted by Darla at 11:02 AM No comments:

This post has a lot of pictures. I thought about breaking it up in multiple posts, but lost the motivation to sort all the picture (some phone, some "real"). I'll try to keep it as to the point as I can.

We decided to make a very quick trip up to NYC. Brian's fantasy football draft was on Saturday, and he wanted to draft in person with his friend, Josh, who lives in Manhattan. I wanted to go along for the ride!

We hosted a family - old friends - on Thursday night (post & pics to come), and took off Friday morning after they left around 9:15

We were essentially only in the city for one day (Saturday), so we tried to fit in as much as we could reasonably do, that was still of interest to the kids. There was quite a bit that *I* would have liked to do, but I knew it would be too much walking and not so fun/interesting for them. So first thing Saturday morning we took the train uptown a few stops to Broadway & Dyckman (Josh lives at Broadway & 142nd), and we went to the neighborhood where Brian's parents grew up. We let the kids play in the same park that Brian used to play in when he was a little boy. Sure enough, the park had all the exact same metal play structures as used to be there in the 80's! 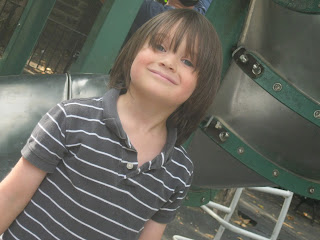 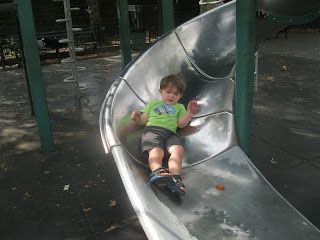 We walked across the street to take some pics in the courtyard of Grandma Kavanagh's building.


We decided to take the kids to the Museum of Natural History. Josh's wife and 3 children were out of town visiting her family (bummer on the timing there, big time!), so we borrowed their seasons pass and hit the road! It was of course, amazing, and the kids had a blast.

We needed to break for lunch, and given the enormity of the building, I figured it would be faster and easier to eat in the museum, than to leave and find food elsewhere, and return...

Brian left us at the Museum right before lunch, and went to meet up with Josh for some male bonding time:-) Josh and Brian have been friends since they were about 12 I think, and Josh is a district manager for Starbucks in NYC. He actually opened and managed the brand new flagship store in Times Square, and once he got it running and off the ground, he left that one store to manage many, many stores. He and Brian took a little tour around to visit some of Josh's stores.
Living in NYC would be quite an adventure, with little kids. Kudos to Heather (Josh's wife), I'm sure she has it all down to a science. I'm new to this idea --last time I was in NYC was in 2004, and I had no children. Easy peasy. Add in multiple children and you need eyes everywhere and very obedient children...and you have to walk a lot...and you have to take the trains...all the subway are obviously underground and accessed by stairwells from the street. There are no elevators. Stroller fun. While Brian was with me, we carried it down. I was left to make my way home from the Museum sans help, as the boys were off doing their thing. This was fine with me entirely. I can read maps, I can follow directions, I don't get lost easily, and I'm not nervous or scared about navigating my way through the city. We had to walk about 3 blocks / 15 minutes to get from the museum to the subway (I needed the Red 1 train, and had arrived from a different way on the C train, since we came from Grandma Kavanagh's but were returning to Josh's) Anyway, it was a few minutes to get there. Grey promptly fell asleep...
Another joy of living in the city...apartments. Josh and Heather have a sweet 4 bedroom apartment. With a verrrrrry long hallway. This was so much temptation for my kids to run. I mean, a hall like that is *meant* for running races, isn't it? Well, maybe, but not if you live on the second floor, and to quote Josh "walk like a toddler who's the weight of a kindergartener" lol. Grey is an elephant! The downstairs neighbour actually came up to complain about him. Ooops! We tried very hard to learn how to walk quietly. We have renters upstairs, so we know how to BE quiet, not how to WALK quiet:-)
There was quite I bit I want to do in the city - Go to Central Park (location of our engagement), and go to the Statue of Liberty, visit the Times Square Starbucks Josh opened (kind of a big deal!)...
We arrived home late afternoon to discover the "boys" deep in preparation for their fantasy football draft. They spent the afternoon touring the city a little, but had to allow themselves enough time to study.
And Sunday morning, we left around 11am...got home at 6pm. It was a GREAT trip and we loved it so much! A huge thank you to Josh for hosting us, and a big we missed you to Heather, Joey, Bobby & Ruby Jane. Thanks for letting us use all your toys & stroller. Next time, I am determined to stay for more than one day!

We had a swim date with some friends today - in a salt water pool! Kinda cool! 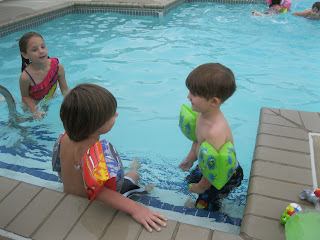 I'll post more & better pictures of their room and bedding, once I get it all together (for example, I need to buy adult pillows x4 for all their new pillowcases - no more toddler sized pillows!). But I coudn't miss a pic or two of them in their new beds on the first night:-)