I recently brought up a difficult topic with Grey: His "Comf"... 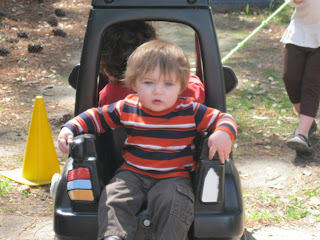 This kid has been all about creature comforts since day one. And probably somewhere around that first day of his life, he decided that our 2-3 year old queen size white goose down duvet was the comfiest. This presented a real problem on going - because of babysitting extra kids, he napped in our bed - and then it eventually became very difficult to keep him out of our bed at all. When he was 15-18months, he'd join us every night. After multiple lectures and disciplines, he changed his tactic. He'd just come in and steal our duvet. Right off of us in the middle of the night. It wasn't sleeping with us that was the main appeal. It was our duvet. 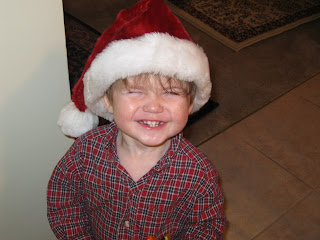 Sometimes he couldn't even wait for a midnight attack. He'd sneak in and grab it right after being put down - when we were pretending not to notice in the livingroom. It was hilarious to watch him, and astonishing, because this is a queen sized, and perhaps oversized queen, goose down duvet - it's HEAVY. Like, really, really heavy. Not to mention HUGE. And that chubby little baby, who we'd eventually refer to as the Blanket Ninja, could pull it off our very tall bed, wad it up, and carry it to his room - it was definitely twice his size, and weight 😂. We tried in vain to keep him from it, we really did, but he loved it because it was "so comf" (his toddler shortform of comfy). 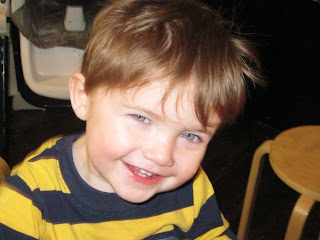 What made us laugh too, was that the Blanket Ninja's strength only seemed to appear at night. He could stealthily move that massive Comf all over the place under cloak of darkness, but come daylight, and he'd tug at it in a "fake show of force" kind of way, and collapse. "Too heavy!" So during the day, it was Mommy's job to return the comf to it's rightful place (on her own bed).
One day, after seeing chubby baby, carrying a more than twice his size blanket ball of Comf "secretly" through the hall to his own bed, Daddy had ultimate pitty over the boy and much to Mommy's mouth-gaping, head nodding "no!" dismay - He said "You really like my Comf, don't you" "yeth" "What if you keep it, and I find another blanket" "okay!". And that was the end of the blanket wars. While we scrambled to go buy something else to sleep with, it ended up ok because at least we got to keep it all night 😂 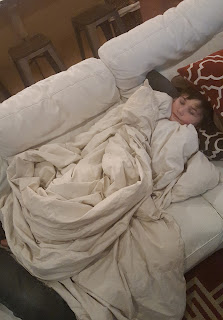 The Comf has been well used. In fact, now that it's around 10 years old (!!!), it's more like a dingy beige, and it's started to run thread bare in places, and feathers come out. I've had to patch it now 3 times. Upon the last patching, I brought up the delicate subject... 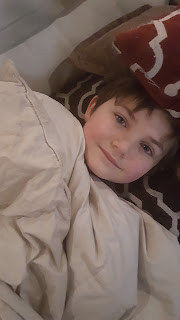 Mom: Would it be ok if we bought you a new Comf? It could be just like this one, only new
Grey, casually: Oh, sure. That's fine. As long as it's comfy and cold
Mom: It can even be white!
Grey: Yah, ok. I mean, but we're still keeping this one
Mom: We...we are?
Grey, in an "of course" matter of fact tone: Yah. I could use the new one sometimes, maybe I could keep this one in my closet and only use it some of the time.
Mom: Ohhhh, welllll...
Grey: I mean, maybe like, on my birthday, I'll use this one or something. But we have to keep it, you know, for the memories

Naturally - the memories. Of a chubby little boy toting around a queen sized duvet. 💙

My only thought is of storing having 2 unwieldy blankets, but, I guess we can just be glad we didn't have a King. 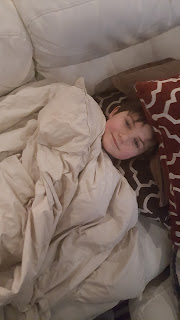 (all pics are from the 15-24 month range, except the last few, taken last night. I got to thinking that maybe we don't have any pics of him, and his Comf. So I took some for "the memories")
Posted by Darla at 10:34 AM No comments:

Jan - I finally consented (after constant badgering from Brian), to get a puppy. (We still have our 3 cats). We started looking for either German Shepherds, or Norfolk or Cairn Terriers. I was a fan of small, Brian always likes Shepherds. The year started out slow, but good. Then it started gaining traction...

Feb - We told the kids we'd start looking for a puppy. They were beyond thrilled. We found a few litters locally and went to look at them - we found the one we wanted and paid the deposit. Naming the dog became Mom's job because the kids had *terrible* ideas, including Tiramisu (Terry for short), and the typical Brownie etc type of dog name. Front runners from Mom included Nash, Solomon, Gideon, Justus, Samson & Ranger.

Mar - We brought home our little baby puppy Solomon Justus. The kids played baseball, and Brooks is now old enough for kid-pitch instead of coach-pitch. He usually played first or 3rd, and was the backup pitcher. Kenna played on a girls softball team, and Grey did coach pitch for the first time! Solomon loved coming to the games and practices with us.

April - I started working at the Woodard Group (Brian's company) one day a week. Super fun. Basically just getting familiar with the environment and doing odd projects for Brian. I will eventually be there full time, but waiting on timing for a few things to fall into place first. It's now been a year since Brian scaled back his weekly hours and involvement in the company (by about HALF!), and it's been a really nice and much needed change for our family. We are all enjoying our "new normal" and having evening and weekends together.

May - I can't actually remember anything significant occurring in May. I think it was just a normal month with school, music, baseball, and me working p/t. Ann's husband Jake came to town, so we did a lot of "family nights" until he left in Aug (with Dale & Lauren too). (His visa for Belgium was messed up and he was waiting on a new one, so Ann was in Belgium, he was not). Our renters at Hugo gave their 30 day notice...

Jun - Jun 1 arrives, and the renters are gone...but they left everything! They do not respond to my calls or texts, and I have no idea where they went to...I ended up throwing out a ton of stuff, and selling a 40+gal fish tank on Craigslist, as well as their mission style table and chairs...but they left a Harley Davidson! I was sure they'd come back for that eventually. We traveled to DC with Dale & Lauren for a U2 concert (bucket list item for Brian). The kids and I didn't go to the concert, but it was a really fun trip! We finished up with May-May, she will go to Kindergarten in Sept, so we'll have no Extra Kids in the house for the first time since 2007! The kids did worship camp again, and I worked while they were there.

Jul - our yearly trip to Ontario! This year one of my sisters (Jillaine) from SK came out too, and that was fun! We always have a good time with our cousins and extended family there. My sister is a great host - the kids naturally want to live with her, and eat her cooking year-round;-) We had a few surprises this month that kind of put us to the test, and affirmed our faith yet again - He is God, I am not, His ways are not mine, He is good in all things.

Aug - we went and saw Goo Goo Dolls in concert (with Philip Philips). And on the last day of August, Solomon got hit by a car. A huge F150, actually, and almost died. As a result of that, he continues to recover with a limp in his front left leg from damaged nerves.
That same day the dog was hit, Brooks got to go down on the field with the Norfolk Tides (our local triple A team) because his baseball team won 1st in their league in the Spring. Lauren and Dale saved the day by taking the kids to the game, so Brooks could go line up on the field with the players for the anthem. Brian and I sadly had to miss it, because we were stuck at the vet hospital from 3:30pm to 10pm:-(

Sept - We started a new school year, and a brand new curriculum - online video school for all! We've started making slow preparations for my going back to work. Even though it's not "right now" we want everything to be in place for a smooth transition. The Harley is still at the rental house, and there is no word from the renters. I went into DMV to tell my story and see what could be done about this. I got started with the abandoned vehicle process.

Oct - Working out the "kinks" in the new curriculum pretty much took up all of Sept and Oct. Daily timed tests, learning to use computers and learning to type etc. It was a pretty big learning curve for the kids, but they started getting a handle on it, and really liking it, in Oct!

Nov - We learned that my sister Janessa was engaged, and getting married in Dec! We went and saw comedian John Crist perform stand up, locally (very funny). We traveled to NY and spent Thanksgiving there with Brian's family (and brought the dog), it was a really fun trip!!

Dec - The abandoned vehicle process is now complete, and I have a Road King Classic Harley Davidson in my name!! We're going to try to sell it! The kids got to go to Busch Garden Christmas Town with Dale and Lauren for the second time, and they loved it (Grey was tall enough to go on the rides this time). I sang in the church's Christmas concert, which was so so fun! We hosted Christmas this year at our house, and then I left for SK on a whirlwind trip there-and-back for the wedding. I got to be a bridesmaid for the first time since Lauryn's wedding in 2008. Basically, I felt old, HAHA. And cold. Because it was about -30something the whole time I was there :-) Brian and I rang in the New Year in his car, waiting on my suitcase to show up in baggage claim. He brought roses, chocolates, and a bottle of sparkling cranberry, and it was the perfect end to a very busy and crazy year!!

2018 started out with a BANG - Winter Storm Grayson knocked out our area for a loop. Lots of snow days and time off so far!
Posted by Darla at 1:41 PM No comments:

Melt beeswax in a double boiler, then add all except EO's. Let cool a bit (cooler, but still liquid), add EO's, and pour into "lip gloss" containers (Amazon).

This balm is *amazing* for healing skin issues of any kind - dry, rough patches, soften callouses, cracked or dry lips, even acne spot, hang nail or cuticle issues, or dry hands. Good for literally everything!! Could even put it in a little 'pot' kind of container, but I love the squeeze and go portability of this kind of container.

I think this recipe filled about 10 of this size container. 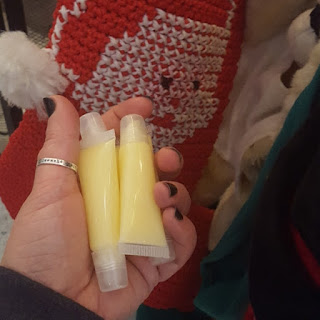