I think I'd say, if I had to describe myself - "I've come a long way" would do it. Nothing brings perspective on that like time. And recently, with the addition of little Vale, I've been brought back sort of "face to face" with the twenty-something Mom I used to be. Honestly, I'm still the same Mom, even though I can now be described as 'forty-something'. But time and perspective have changed me a little, and really, it's a lot. But I don't always think of it or see it, until I do. And then, WOW, I've come a long way.

I was talking to one of my sisters recently. I dispensed what I thought was a sage piece of advice - the topic? Toddler beds.

See, when Kenna was 13.5 months old, we welcomed little Brooksie to the family, and I, being practical I suppose, decided that having 2 cribs was out of the question. I never even looked for a crib secondhand or anything. It wasn't that I couldn't get one, and was making the best of it...I didn't want one. I moved Kenna up to a toddler bed. She was obedient, and mentally able to understand the concept of staying in bed, technically. But she was too young. Looking back on it now, what I couldn't see while walking through it is just the simple fact that she was not ready yet, and I was testing her, and requiring obedience of her that was unnecessary.

I don't even know where the advice came from. I certainly haven't sat around thinking about toddler beds over the past 10 years. But when the topic came up, it all came rushing back.

I created so much work for myself. So much stress. And why? Because the idea of having 2 cribs was a "no" for me, though now I can't even think of why. I rushed her into growing up, and I shouldn't have. I created a discipline issue that I was obligated to follow through with, and looking back on it, I don't really think I had the bandwidth to deal with that - even though I did do it. But it cost me something, and I didn't ever think about it that way.

So, I say, don't rush your baby or toddler out of the crib. Having 2 cribs is ok. It doesn't mean your children lack self-control if they get out of bed when they're too young for that much responsibility. Can they learn it? Of course. Was it worth it? Not to me. It might be worth it to someone else, of course. Advice is free - to be heeded or discarded. But now that I'm 'grown up', I find myself more apt to follow advice and less apt to try and figure it out on my own.

I guess that's the part of life that can be described as "the wisdom that comes with age".
Posted by Darla at 11:36 AM No comments:

We were planning to go on a secret trip Saskatchewan in April - we had flights booked, and an off-season camp paid for - a place that had room enough for every family to have their own room/space, while having large gathering spaces, and a big kitchen/dining room. At the time of his birthday this year, there are 49 of us - with 2 more due soon! (Amy in May and Jillaine in Sept). So we'll close out 2020 with FIFTY ONE people. That's so crazy to me! But not crazier than the COVID-19 hysteria that shut down the universe in March. Our tickets were credited, and all plans cancelled. Sadness.

We rallied and decided to do a little birthday video for Dad, since we couldn't be there in person, we made a video. Chantelle compiled all the footage...and there was too much for one video (it's almost an hour long!) so a second video/bloopers reel is in the works too I think.

On his actual birthday we set up a Zoom call - and that was kinda weird, but fun. (The empty chair was Janessa, leaving to attend the current youngest member of the family, baby Jhett:-) 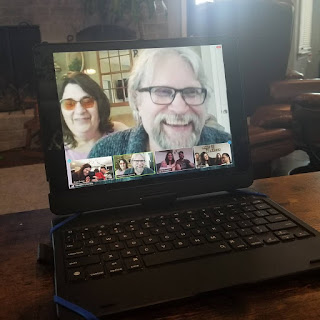 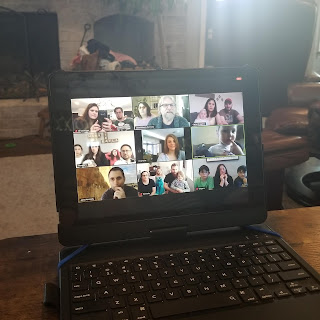 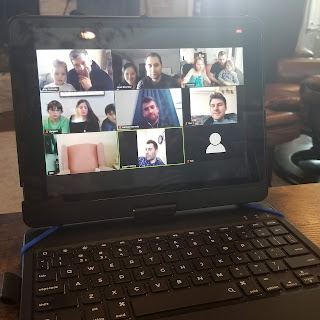 We're hoping to get up there for a visit before Vale turns 2, and we need to purchase another ticket, but we'll have to see what the world will allow first, I guess:-/

We love you DAD!