On Saturday, we had soccer practice in the morning. And then we headed down to the beach for the Neptune Festivals parade. In our excitment/rush to get parking and get to the parade on time I left my camera in the car. Totally bummed! The kids have never been to a parade before, and they loved it! Having people throw candy at you makes anything fun, really:-) The first marching band came by with a BOOM BOOM BOOM on the drums. Brooks immediately buried in Brian's shoulder with tears in his eyes. It's a marching band Brooks! This is fun! He was a little skeptical at first, but then completely warmed up to it all and sat on the curb by himself. He's been talking about marching bands ever since. So glad we did it, it was so fun, but I am so sad we forgot the camera. We'll have to go again next year!
Posted by Darla at 11:05 AM No comments:

This is truly a phenominal rendition of the American National Anthem. This was at a Texas Tech University basketball game . . . The National Anthem is sung by five little girls. The two on the right are six years old. The two in the middle are seven and the one on the left is eight. Take a moment to listen to this. The harmonies are amazing, and so impressive for such tiny little girls!!

Another soccer practice! Last Saturday was not a game day, but a soccer clinic, where they go over all the rules and how-to's by station...so you visit the "heading" station and get your lessons, or the "throw in" station etc. Because of the more advanced nature of the clinic, the 3 & 4 year olds do not participate. Can you imagine trying to teach them how to head the ball? Lol. Not a good idea:-) So we had a day off. Our team name is the Penguins, and our tee-shirts will be black and white, apparently. So cute. Can't wait to get them/see them!

Stretching and listening to Coach 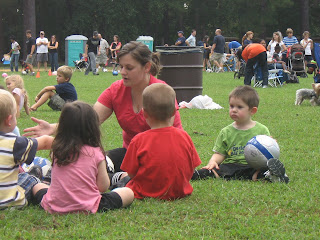 Doing something...not exactly what the drill was supposed to be. 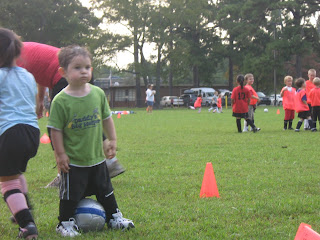 Water break! It was a very hot day! 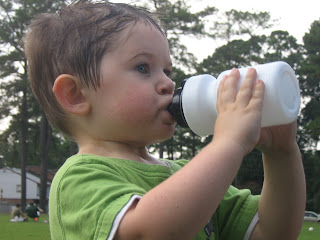 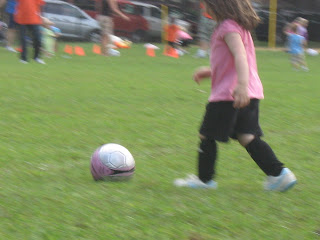 To celebrate fall, we had pancakes today, shaped like leaves. Yummy! Even though it's 86 degrees here today and the a/c is still blasting, we are still trying to get into the season:-) Since I wasn't raised in a warm climate, it's sort of an adjustment to try and celebrate all 4 seasons, when it doesn't feel familiar. Christmas sneaks up on us like crazy, just because it doesn't "feel" like Christmas season, to us Northerners. Not complaining about the temps at all! Just feels sort of strange to be telling the kids about changing colours of leaves, etc. when we can't see it happening. It's coming up on "Markham Fair time" in my mind...even though I don't have a fair to go to (I miss it! Especially 2001...fun!)...we'll just be happy with our leaf pancakes :-)

*Note: on the Markham Fair homepage, the last pic on the bottom (hay bale) is of my Aunt & Uncles house/farm. Cool. I just noticed that now...I wonder if they know? 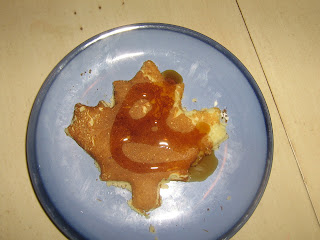 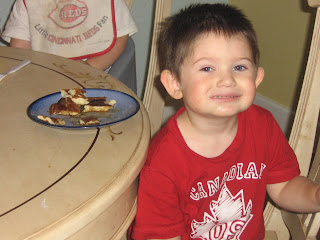 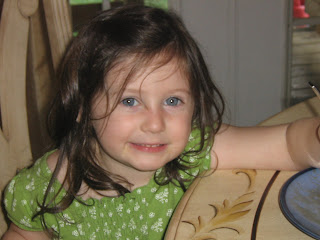 Today we went to the beach, as I knew it would be one of last days this season we would get there, before the water gets too cold. Now that soccer has started, we are past summer and on to fall...at least in our schedules. The weather will catch up soon! 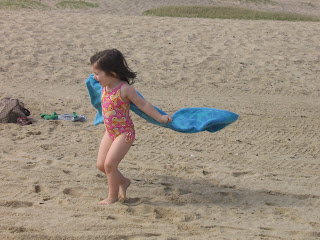 The water was so warm today! Warmer than I remember it being for a long time! 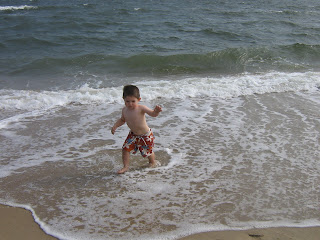 Ready for beachy fun. We went to a beach that is a 5 min drive from our place. Much smaller waves than the "popular" beach, and much less crowded. Last time we were here we saw a few jellyfish, but not today. 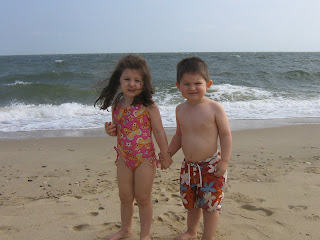 He runs to the water, throws in a shell or rock and runs back for more. 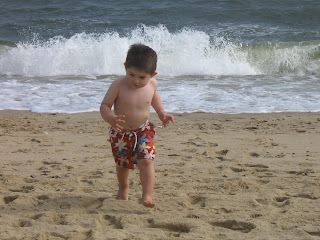 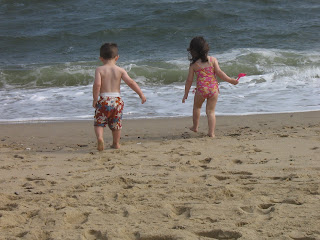 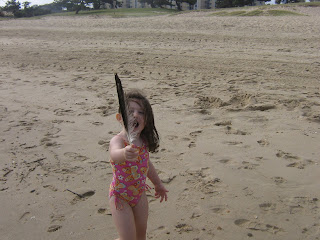 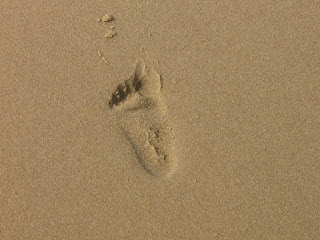 We got some caramel sundaes on the way home to celebrate. Or "caramelon ice cream", according to Brooks. Kenna told me "thanks, I just love the beach so much!"
I was so glad we got to go lots this season, and they (mainly Brooks) totally got familiar with the water and everything. Fun times, can't wait until next beach season! 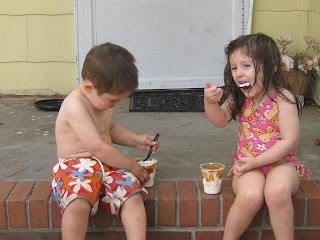 Today was the first day of soccer! Just a practice today, and the coach was away, so I was helping to fill in. I knew I wouldn't get any action shots today, so I got these before we left.

Smiling (?) faces. So excited to play! 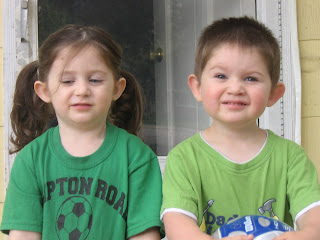 We'll get our shirts on Saturday or next Thursday, I think. Other than that, we are all set! 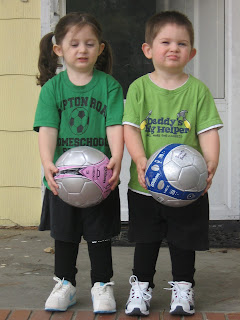 I know my posts have been few and far between recently...apologies! I would post more...but am lacking pictures, and I hate posting without pics. Oh well. The past few weeks have been very crazy and busy, and snapping pics has been on the back burner. Actually, as I think about it, I don't even know where my camera is at the moment. Shame on me!

Last weekend my Uncle and Aunt (and 4 kids:-) visited us over the long weekend from Ontario. We had a blast and were so glad they came to see us. We miss them a lot, one of the bummers of moving away...you never get to see the people you want to often enough.

Another friend, in the navy, is leaving town...so there have been lots of goodbyes and parties for him (will be back after deployment & training, yay!). Brooksie asked why he had to leave, and I said he had to go to the war, because that was his job. "Oh. Just like Daddy does?" Ummm, no. Not at all like Daddy does. Daddy is a fixer, so he doesn't go to war. Lol.

The kids start soccer on Thurs, so we are super excited about that! I'll get some pics then for sure. I am actually helping coach this first practice as the Coach will be out of town.

I started doing childcare for Jack, every day. That has been an adjustment, as we are mostly/usually at Jack's house (about 4 blocks away, not far!!), but still, just rearranging life and laundry etc around a new schedule is an adjustment. It's actually great being at Jack's because my house stays neater since we aren't here to mess it up:-) Also, they have a fenced backyard which is NICE. And a dishwasher. Oh the little things that give us joy!

Brian is no longer the youth pastor, as of about a month ago, I guess. They had been looking for a full time person (which he was not able to do), and finally found a replacement. So that has been a transition and a change, and we miss it!

The kids started Cubbies last week and have 2 verses under their belts so far (God is love, and God created the heavens and the earth). They love their books and are so proud to do lessons with me so I will sign in it. Brooks is technically too young to do Cubbies, but there are only two 2 year olds in our church, currently, so it made sense to just have them tag along and try to keep up with the 3 year olds. So far he's doing great and loving it, although I definitely notice a difference in the attention span between them when I am reading through the lessons. She would sit forever and listen, and he wants me to hurry up and talk about the pictures etc. I think it will be a good experience for him when all is said and done.

I am almost 13 wks now (I just looked it up, since I am so bad with keeping track of that stuff!), and I have my first appointment with the midwife tomorrow. I am feeling well, hardly ever nauseous anymore, and slightly less tired although a nap is pretty much necessary to get me through the day.

What else? That is a quick update about whats going on, since my postings have been sparse. I promise I will get that camera out and get posting more!
Posted by Darla at 9:10 PM No comments:

Anyone who has been to my house, knows that our little property is practically a forrest, home to no fewer than 14 humongous trees. And we have a regular town lot, it's crazy. It's a "someday" dream to have all the trees removed, except for the Live Oak (all others are pines). This is an extremely pricey prospect though, costing as much as 20,000 to have them all removed. So until lots of extra money falls into our laps, we will rake pine needles! Brian and one of his crazy friends decided to limb some of the trees (giving us a little more light in the house, and also, preventing them from flying off and causing damage during a hurricane).

Let me tell you, those little branches look A LOT smaller up there on the tree than they do on the ground!! With the help of climbing equipment and very tall and scary ladders, they cut down some limbs. Really not very many in the grand scheme of things, but WOW. The dumpster is full, the yard is full, and the trees are still way too big and still have way too many branches! 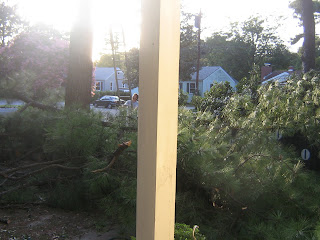 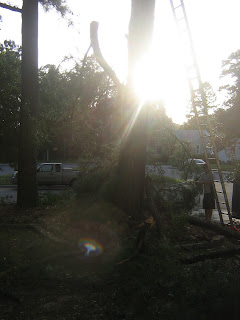 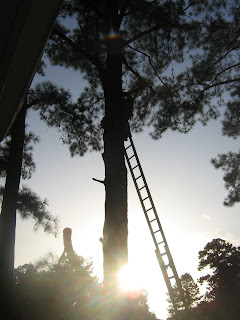 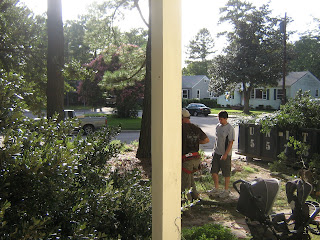 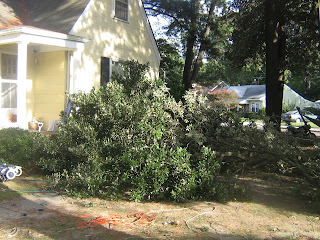 Barely started and it's already full! 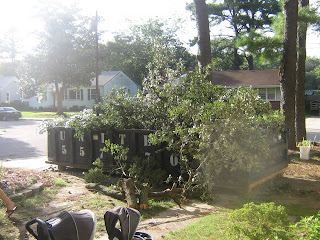 Watching them clean up some mess, completely blocked in the house! 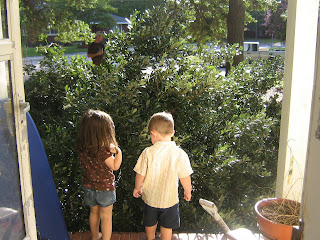 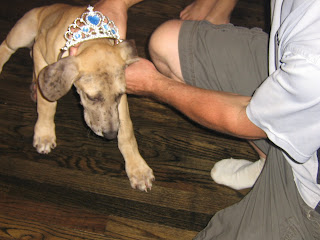 Kenna asked for braids, just like Jillaine has:-) Brooks found a hair elastic "it's Dewaynie's, go give it to her Mom. Go!" I told him we would give it to her next time we see her, lol. I'm sure she's really missing it:-) 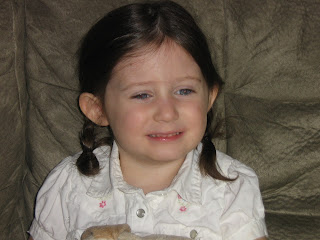 Soccer starts on Sept 10th! The kids are VERY excited! They have new shoes, pads, shorts and their own soccer balls. On the day we got them, they insisted on sleeping with them. So cute. Brooks' is silver & blue. 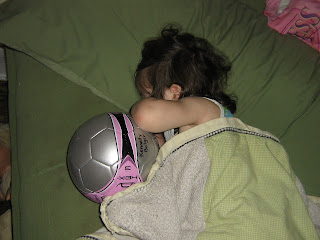 I got a neat idea from a friend on facebook. Celebrate 831 Day on August 31st...

I LOVE YOU
Posted by Darla at 9:33 AM No comments: