Typical Wednesday evening about to occur - As soon as Sonny and May were picked up, we took off to Walmart to get some vacuum bags for Brian at his jobsite, and run them over to him (so he could get done sooner without doing the errand himself), back home for a quick spaghetti dinner, and off to Awanas!

We got as far as...almost to Walmart. Abandon all else!! We nearly made it and were stopped at a light right in front of the Walmart - when CRASH. We got hit. The slow motion of that moment is kind of unreal - I heard brakes locking up and squealing, but that sound didn't seem very near me. I could swear I heard the glass shatter before the impact of the car hit me. That couldn't be possible, but that's how I remember it. The impact pushed me forward and I bumped into the car in front of me. 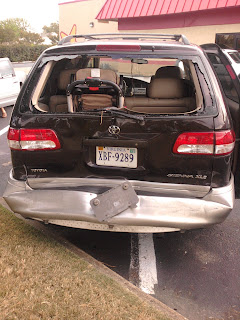 We were all ok. A surprising jolt, but all safe and unharmed - for now anyway, we may have some stuff necks in the morning! The person who hit us (a large Econo Van) was immediately very sorry and worried about the kids.

He said had been using his phone as GPS, and it fell onto the floor. He reached down to get it, and when he looked up, we were all stopped, and he couldn't stop in time. I felt bad for him.

As soon as we were hit, I noticed a police car at the intersection ahead, he must have heard our big boom, and drove over and got to work with all the details that need to be taken care of. 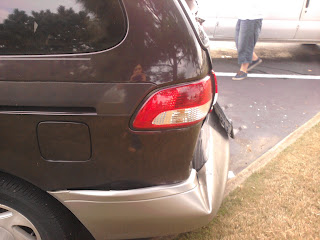 The person that I hit in front of me - I barely tapped him. There was no vehicle damage to his car, or the front of my van, and he told the police he wanted to go, and didn't want to be included in any thing, so they let him drive off.
A change of plans! Brian came to see us at the scene, and Lauren came to pick us up in her car. Insurance guy says I need 3 new carseats now, since they've been in an accident, they were put on the list of things for insurance to pay for. They towed the van away - bye bye van. I loved you. A lot. :-) 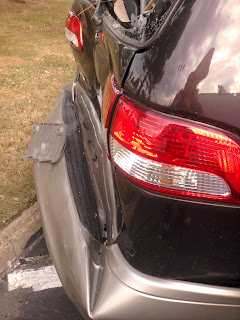 So thankful for many blessings! The person who hit us is fully insured. None of us appear to be hurt. The kids don't seem freaked out by the experience at all. Basically, we are just left with the inconvenience of a broken van.

We won't know until tomorrow at the earliest what course the insurance companies want to take - repair it or total it. It seems fixable to me - but I know those costs can add up, and it is an older vehicle (2002), so who knows what they will consider "worth it". I hoping we'll be able to get a rental car through the other persons insurance - we have comprehensive coverage on our van, but not rental insurance. If not, we'll manage!

Thankful for the Lord's protection! This is actually my very first car accident (aside from when I once hit a deer, which was not my fault) - this one wasn't my fault either, but I was driving, so I guess it counts as my accident:-) Brian is kind of gloating I think - I said hey - my ONE accident, to your THOUSANDS! And he pointed out that I've had the only accident all year, haha. There is always something to smile about, for sure.

Oh, and we finally made it home just after 6pm (accident happened at 4:50), and made our spaghetti dinner, and decided to skip going to Awanas, because we didn't want to walk that far;-)
Posted by Darla at 9:36 PM