Geography app is supposed to be for the big kids. {Such a MARVELOUS learning tool!}. Grey loves it, it's too cute. There are many facets to the app, the video shows a few things (of the less-educational side, since Grey can't really do the hard stuff), when we first got the app, I thought that it must have been made in Japan perhaps, since the alternate first choice for a language other than English is Japanese. That at the map is "backwards" compared to how we normal show the world, from our North American perspective.

However, extensive trips to the Japanese Cultural Center in Toronto as a child (I've been at least 3 times:-)...I remember that they taught us that this is how maps look in Japan. So that settles it, and I'm fairly certain. I actually like that its different than the "norm" here, so that the kids can grasp the roundness of the world.

There is a part of the app that shows the flag, a person from that country, and the way they say Hello in their native language (shown in video). Every English speaking country says Hello properly. Except the United States. They picture a native Indian, and it says "Hellllllloooo" weirdly. Kenna looked at me suspiciously and said "That is NOT what we are like!" haha!! Perhaps they are sticking it to the man or something. Hellllloooooo. Now we like to say it weird too:-) Watch to see what I mean. 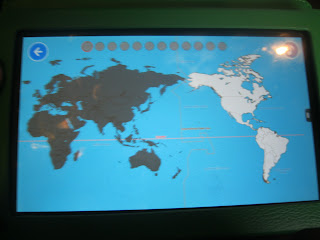