Last night was a Christmas Party for Brian's company. We had a wonderful time with everyone. As it is a small company everyone gets along well, and so the "awkward Christmas party" thing is not really the case, as they are a tight knit group.

One of his co-workers, Gerry, presented each family with a gift he made. A birdhouse, built entirely out of materials he salvaged from the various jobsites over the past year. He told the story of each part but "in code" like..."this OSB was from Julian's job out in Suffolk, and the plexiglass is either from Eddie's airport or Mark's blah blah blah..." So this doesn't mean much to me, since I have no idea what Julian was doing in Suffolk 8 months ago. But all the guys knew and laughed about the stories they recalled. Brian says they are all lucky to be alive after the demo/tear out of a certain job at Janaf Mall, which provided Gerry with all that rumply rusty stuff for the birdhouse's exterior:-) I had not previously heard about the near death experience of about 10 people, and I don't think I want to know;-)

So I don't really know what parts are from where, but they were all on jobs that Brian was a part of, and that makes it special. A very nice Christmas gift, and a wonderful idea for him to collect things over the year to make them. Sentimental gifts are the best ones! 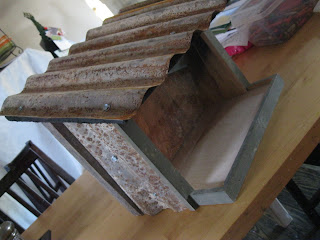