I gotta post it! Before he gets as skinny as a stick. He's been slimming down rapidly, as did the other two at a similar age. He's still a tank, don't get me wrong, he's just losing all that baby chub that I/we/everyone loves so much. With the weather being so great, he has discovered the joy of outdoor play and he loves it! It means lots of dirt and lots of baths though too. Nothing like running around naked after a tubby! 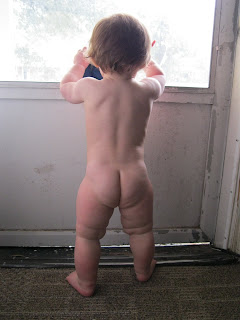 A fun way to start a Monday? With a bouncy house! Thanks to a friend from church, we have this little gem, which is very perfect for the younger kids. Sonny was in heaven. Clapping and laughing his head off! It's a lot safer for the littles than our big trampoline is. I'll have to set it up outside this summer for Grey and Sonny, only. 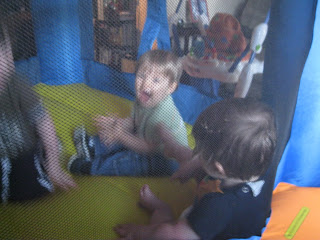 It looks like I have them in a cage. Not far off really:-) 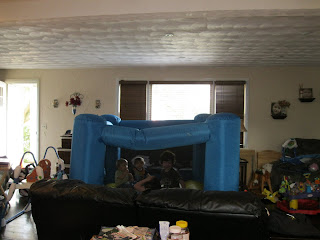