We welcomed our second son, Lleyton Gregory David (Grey) on March 21st at 4:56pm. He is 9lbs 5oz and 20.5 ins long. I started having Braxton Hicks contractions on the 20th, in the early morning. They were completely pain-free, but consistent, and then they stopped.

Early on the morning of the 21st, the same thing started again with contractions, but they didn't stop, and didn't speed up too fast either (which was my fear since Brooks' labour was so short. I was praying for a more relaxed pace this time). It was a nice lazy Sunday, we stayed home and all was well. Around maybe 11am they started to get a little bit painful. Brian and I went for walks around the block to get things moving. Around 2pm they started to get stronger, and by 3:30pm they were pretty strong and lasting around a minute, so off we went to the hospital! We arrived around 3:45-ish and had to wait a few minutes, as the midwife was delivering a baby in the other room (we could hear it through the wall!...NOT something that is very encouraging at the time...like, oooo, ouch, that is about to be me!).

Anyway, we got settled in our room and she checked me out, 7cm! They started to get the hot tub ready for me, and hooked up the doppler thingy to listen to the babys labour pattern, which they do for about 20 mins. After they listened to the baby - who was doing fine - (and after 4 to 6 very painful contractions), the midwife, Blair, said, you know...I don't think you're going to make it to the tub (it wasn't full enough yet). That was fine, I'd rather have it over with than drag it out waiting on a big tub to fill up! She checked me out and I was 10cm, and as she was checking, my water broke. This is something that never happened to me with the other 2 (Brooks' was in the tub, and Kenna's was a slow leak), so that was pretty different...and it was a lot of water! So much in fact that Blair said it created a tidal wave effect which caused 2 separate and very serious birth complications.

The doppler was still on my tummy, and the cord began to prolapse, and the babys heart rate plummeted very quickly. The cord was also wrapped tightly around his neck, but they didn't know that yet either. Blair just said "ok, you have to get this baby out NOW" and called for other people and equipment etc, they were planning to move me out for use of a vacuum, or potential emergency c-section.

The second complication was that the "tidal wave effect" caused the baby to decend very quickly and he came out 'straight on', instead of rotating a shoulder downward as babies are supposed to do. This caused a very serious problem called shoulder dystosia, where the head is delivered, and the shoulders are stuck. Obviously, they were not throwing around terms and verbage about the situation at the time. All I was getting was this and that instruction, and literally "PUSH THAT BABY OUT NOW!!!!" Believe me, I was trying! I could tell this was a very serious situation...well actually Blair did say that, or maybe it was one of the other nurses, but they said in those moments, "You have to do this NOW, this is very serious". I was sufficiently freaked out, needless to say. They threw me over on my side, and yanked me back around to my back, and out he came! He was delivered in about 5 minutes time, total. Which they later told me was a real blessing, as he would be much worse off if it had taken any longer at all.

They had a team of doctors and nurses working on him immediately, and nobody said a word. Not to me/us anyway, they were just talking medical stuff. And I thought he might be dead. Brian's first words were "I was right", so I knew it was a boy (I was betting girl:-). "Why isn't he crying?" Nobody answered me. "Why isn't he crying?" I asked again. Blair then said, "it's ok, he's ok, he has a heart beat" He just needed oxygen. His one minute apgar score was 2 (out of 10)...which basically means his heart was beating, and that was it. But they worked on him, and he came around quickly, his five minute apgar score was 8. Amazing detail...after all that, I didn't need a single stitch!

They shoved him at me for a quick kiss before they whisked him away for more treatment and so on. Brian went with them. That was the first time I saw him, and I didn't really "see him", like I couldn't remember if he had a lot of hair and stuff like that. Too distracted!! This is when the midwife and the nurse then really explained to me fully what was going on. I knew about the seriousness of the situation, because my Mom's biggest baby (Janessa - 10lbs 9oz), was a shoulder dystosia also. Her situation was much worse (stuck longer, collar bones broke), but still, I just knew how bad it could be. In the nursery he did well and was moving both his arms (indicating his collarbones were not broken), but initially, he started crying a lot, and when he cried his blood oxygen saturation levels would fall very low. So they kept him under observation for the night, and he did well. I got to go see him in the nursery as soon as I was allowed out of bed (they knew I was so worried about him), which was around 7pm or so. Then I got cleaned up, had the kids and Brian's family visit, ate some dinner with friends, who had their baby girl on the 20th, and they were just down the hall (pretty fun!). Grey did really well under observation, within a few hours his saturation levels stayed at 100%, which the pediatrician had explained to us would be the best case scenario.

So, with the most traumatic birth of the three kids (Kenna's story is here, and Brooks' is here), I was able to come home quickly (right at the 24 hour mark), because he bounced back so well, and I was not Group B Strep Positive as I had been the previous two times.

Sorry this post is so long! Here are some pictures to go with the story...

They took him away in a hurry, and obviously, weighing him was not top priority. They were gone for awhile and I had no updates, so I was nervous for him, and the nurse brought me this: 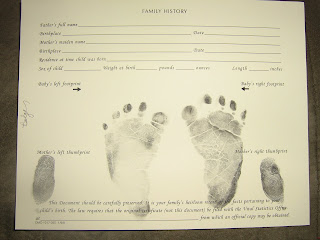 WOW! Those are big feet! How much does he weigh? Oh, she said, I didn't ask. So she went to find out and came back with the verdict: 9lbs 5oz. Yikes! 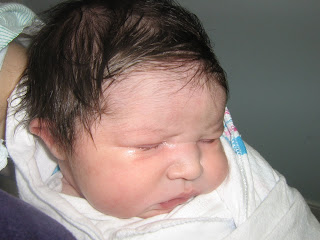 This was the 7pm visit, my first chance to see and hold my little boy 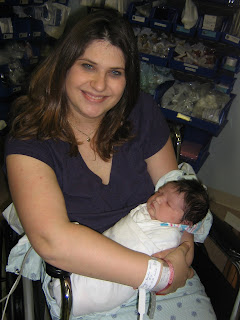 He's so cute and looks so much like Brooks 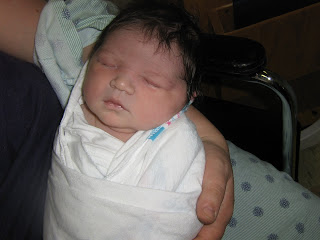 Under observation in the nursery 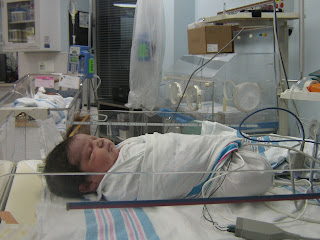 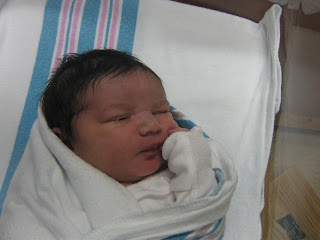 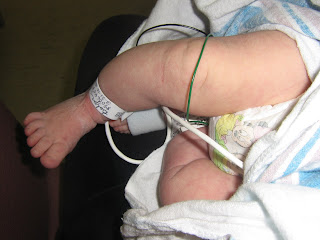 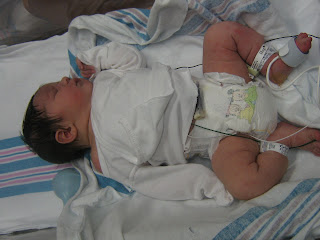 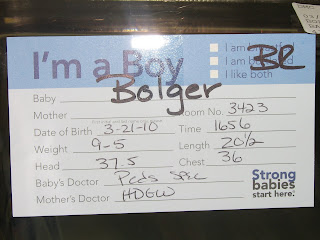 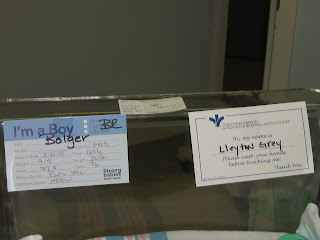 The next morning he was brought to my room, no more observation, he is doing so well! 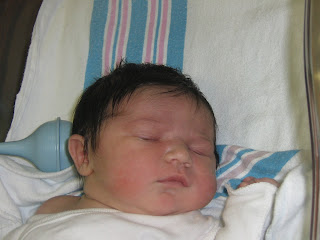 First picture taken with Daddy, March 22, early in the morning. 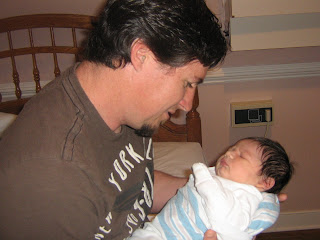 All is well, back in our room! We are so grateful that all went as well as possible in such a dangerous situation. Praise the Lord! His Hand was certainly all over this little boy right from the start. We love you Lleyton Grey!! 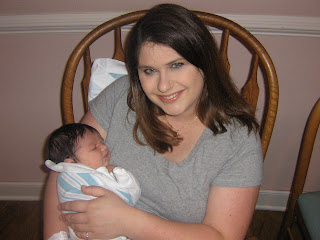