Trying to fit in

Last night we had dinner with some friends. They have 2 little girls and tons of dress up and princess clothes. The girls came out to show us their outfits, and we were busy ooo-ing and aaah-ing over them. Then Brooks runs away and comes sneaking back into the room, like this: 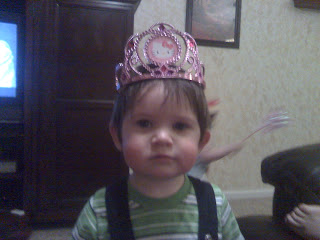 (Brian's camera phone, so kinda fuzzy)
I was so impressed that he actually got it on his head all by himself! It was so cute. He had a purple stick and was using that as his wand. We all had a good laugh, and then we got him a cowboy hat and made a big deal about that for him. Poor boy. He needs some boy friends!

He's such a sweetie. My current fave is how he doesn't say r's at the end of a word. Rubber is rubbay, spider is spiday, sugar is sugay, water is wa-day, our last name is bo-day. Pretty cute! We are working to correct Kenna on saying "dat" or "dey" and pronouncing the "th", she can do it with help, so it won't be long before it's automatic. Brooks talks so well, and is so tall that I keep having to remind myself he's still only 1 years old. He does something and I'm thinking What on Earth!! Why would he DO THAT? But, he's still young, his size just throws me off. Last Sunday he announced his shoes were "too tight" and refused to walk in them. He stood in place and wouldn't budge. So he went to church in socks (they really were too tight:-/) and we got him some new shoes on Monday, size 7! The old ones were 5.5w, so no wonder he'd had enough of them! He hit a growth spurt in the past two weeks, and we have noticed how quickly he's grown. He and Kenna are now in the same shoe size, and she's only taller by a hair. He's gonna be a big boy, it seems.
Posted by Darla at 9:58 AM