Well last night was a CRAZY one! We had 2 parties to go to, one in the afternoon and one for dinner. We arrived at the evening birthday party for a friend, but were only there an hour when Brian said we had to leave. I wasn't quite sure what was going on, but it didn't take long (minutes) before he was in considerable pain. We packed up the kids and headed home. The pain worsened, and he began vomiting, so off to the emergency room we go! I had a friend come watch the kids (and then Lauren came later for the early morning shift! :-/).

We checked in at 8pm...and there we waited! He had an initial triage diagnosis of kidney stones and then we were set in the waiting room to wait for a bed in the ER I guess. Brian spent almost the entire 3 hours in the restroom:-( We finally got back there around 11, and he didn't get any pain medication until 12:30!!! It was a brutal wait to say the least, he was in excruciating pain the whole time. He finally got to relax with some pretty heavy meds and then they took him off for a CAT scan, which revealed 2 kidney stones, one 5mm and one 2mm. So now we have to see a nephrologist with the ER's referral to see about breaking them up ultrasonically...supposedly we will get in tomorrow or Tues, I will find out more on that tomorrow, of course all doctors offices are closed for the weekend.

They gave him 2 bags of fluid via IV and some oxycodone and motrin to help keep him pain free while at home and sent us on our way at 4am! What an evening! Brian was a trooper and really held up remarkably well considering his pain level and the amount of time he had to wait. Keep him in your prayers these next few days as he is still in some pain. The oxycodone doesn't cut it like the IV drugs do!

Since the kids had a great night sleep, I opted to take them to church to tire them out more and help them nap longer. Success! I was able to get a good nap in, and with going to bed early tonight I should be pretty much back on track. Although I will have to get up every 4 hours to administer drugs to my patient, but I can handle that I think!

Although pain is never nice, I think I have decided I would rather deal with being the one in pain than have to watch someone else in pain. There is such a helpless feeling of not being able to do anything. Not fun. Once he got on all the happy drugs we were able to laugh about it a little. The drugs obviously affect your thinking, so he said a few funny things, but did pretty well not getting too loopy...he said he thought we should never have anymore kids because he didn't want me to go through that pain...lol, I told him it was ok because that was a bit different:-) He is also convinced that the doctor told him he needed to eat a lot of gummy candy. Haha! I'm like, are you sure you didn't dream that honey? "Nope, he told me". I think somehow the drinking water instruction got lost in translation :-D

Camera phone pic. Am I horrible for taking a picture of his misery? I just wanted to have some memory of our exciting evening...he's not in pain anymore but sleeping, drugged up on dilaudid. 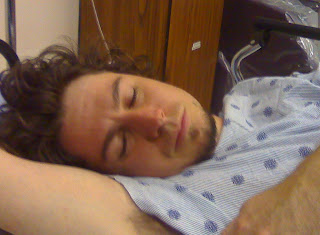