Well, teeball, which started in March, is now over. Wow. That went fast, and I realized that it being the last game, I better get some pictures!! This season I helped out quite a bit getting them all organized on the bench for batting in order, and it took up much of my time, so I didn't have the camera handy.

Kenna is much improved this year, and showing more interest too. Brooks is of course totally into it, and his skill is quite good for his age.

Here are some pics from the last day of teeball, ever. Next year they will both be moved up to Coach Pitch.

Being that it was the last day, kids were already a little giddy. Not to mention that we play at Fentress Airfield, and planes were doing touch and go's all morning (distraction for kids:-), and then, they had the firetrucks out and were sprucing them up for...spraying off the kids! How fun is that?! We actually didn't stay for that part, as our game ended much before the projected noontime spray-off. But such a fun idea! 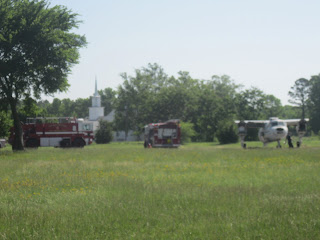 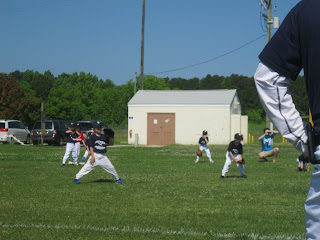