Ok, well, each year I like to make the kids something nice and special for their birthday cake. This years idea and inspiration for Kenna's cake came from two places...my head, and pinterest:-)

...when I was making the birthday video for her (which I started back in Dec!), I wrote the one caption "You were born with sunshine in your soul", and it really struck me as to how true that was, and how accurately it described her (which is of course why I wrote it!). She is so genuinely sweet. So what goes with sunshine? Clouds and rainbows of course! There are 6 colours in the rainbow, and she's turning 6. SOLD. There are some really fun rainbow ideas on pinterest, so using those as my inspiration, I set out to make a rainbow and cloud cake.

So after buying up all the food dye in the nation, we set out to have a rainbow-y day!

First step to Kenna's cake (which I remember my Aunt doing something similar for my cousins cake years ago). Take Wilton white chocolate wafers, and melt them. Add liquid food dye. I think because the dye is not oil based, it "turns" the chocolate and makes it into a playdoh like substance. Modeling chocolate!! Make your shapes and let dry, it will harden back up, and then you peel it off the wax paper, and use the smooth side (wax paper side) as the "good side".
Next step was baking. I used 2 Duncan Hines White Cakes mixes, divided them into 6 parts and dyed them all the colours I wanted. Then I baked them one by one...I only have 1 eight inch round cake pan:-) 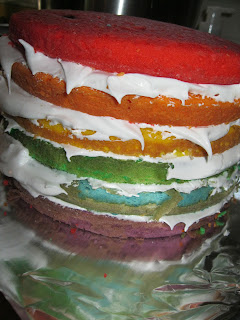 I made some icing I've never made before! I was tired of butter cream and wanted something more cloud like without using cool whip. I doubled this recipe, and we LOVED it!!

Beat egg whites until foamy and thick; they should mound in the bowl without holding a peak. Set aside.

Bring sugar, cream of tartar, water and salt to a boil, stirring frequently. Sugar needs to be completely dissolved.

Begin to beat the egg whites again, and immediately pour the boiling sugar syrup into the egg whites in a slow stream, beating all the while. As you beat, mixture will thicken.

Once the syrup is added, stir in the vanilla, and continue to beat until the icing is thick and holds a peak. 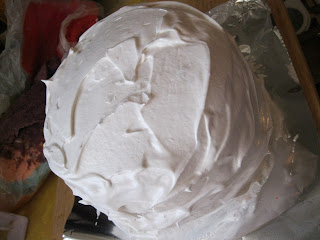 So now we pause for a rainbow-y lunch!! PANCAKES! 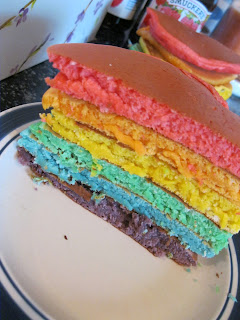 And here is the rainbow cake!! It was gorgeous, and very tasty! 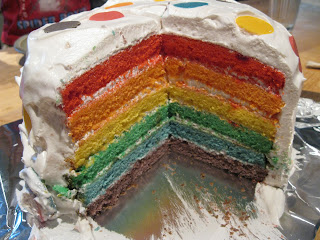 And here's the happy birthday song!