It was not over one hundred degrees out today, so I decided to take advantage of the "cool" 78 degree weather and suggested a trip to the park. A park is akin to a haunted house of horrors to Brooks, but he was initially psyched to go anyway.

Eating a 4th of July donut for snack. Yes, Kenna did her own hair, complete with about 10 clips in it. 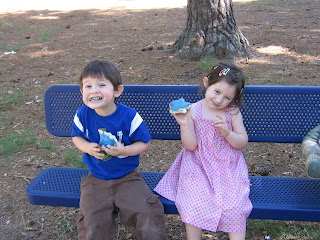 Kenna immediately jumped on the playground equipment, which is made for 2-5 year olds, so it's pretty tame. Brooks attempted to go up the stairs, but was scared and hung back with me. He decided he wanted to swing, so we did that for a little while. This was Grey's first time on a big boy swing! He really liked it and almost fell asleep at the end! 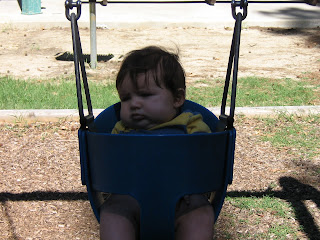 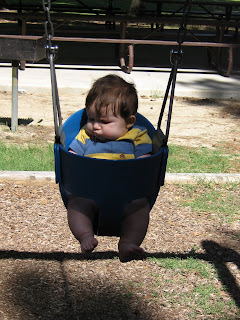 Brooks spent most of his time asking for pushes. Kenna, our little observer of human behaviour, was quite preoccupied by an unknown 2 year old, Mace, who was apparently making very bad choices, according to his yelling mom. When Mace was eventually extracted from the slide by other older children, he was going to be spending the rest of the time in time out. According to the yelling threats anyway, I never did observe him sitting on time out anywhere:-) 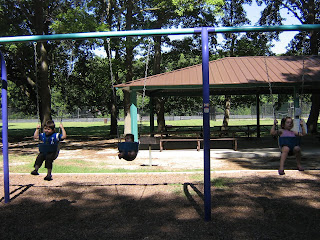 After swinging it was time for some playground fun. Kenna was doing her usual monkey antics, I helped Brooks climb the stairs (the easiest way to access everything). He spent quite a bit of time just going up and down the stairs. (He is afraid of see-through floors, if you didn't know. I actually was too, as a child). To access any of the slides, you have to cross the "jumpy bridge". It's a bridge...but it barely moves. It does jiggle enough to scare the socks off Brooks though. We worked up to it, and I held his hand through the bars from the ground. After doing it once he went back and forth a few times slowly. Plank by plank, hand over hand on each bar. Other less considerate children (aka Kennedy) would race past, jumping on purpose to make it jiggle, which would freeze him in tracks for a minute, but he kept going. He even once made it down the "big" curly slide! And he didn't cry about anything at all. He's getting braver, I think!

This face is priceless!...and here is yet another boy in need of a haircut! 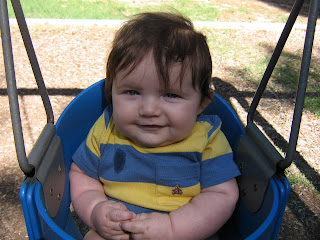