I love living on a cul-de-sac! We love playing on the street, with no traffic! Kenna is learning how to pedal and steer at the same time. So hard! 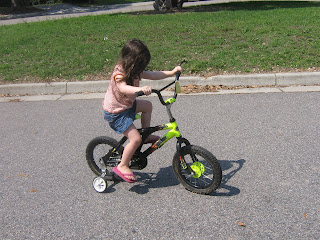 Brooks, riding "White Lightening". This trike was Kenna's, and it was pink and purple. This year he refused to ride it, as it was a girls bike! So I grabbed the spray paint, but all I had was white, so I primed it all in white, and we'll go to Home Depot and pick out another colour to finish it off. I told him we could name it White Lightening, since he can go as fast as lightening! That is a bit of a motherly exaggeration, as he can't really go forward very well yet, only backwards:-) He didn't get a lot of chance to practice last summer, so this is really his first time to practice. We'll get him another bike this summer, but this should get him used to pedaling anyway! 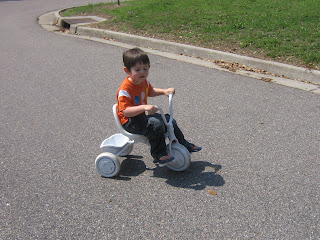 The audience. Big Grey watching from the sidelines. Click here to see Kenna and Brooks in the same stroller (they are wearing the same onesie though, I will have to see if I still have it). Grey is only 2 months old, compared to their 3, but he's just as big! Kenna was 10.10lbs at 2 months, Brooks was 13.9lbs at 2 months. So Grey wins that one with his 15.6lbs! 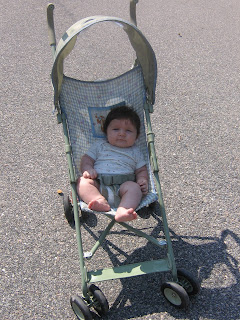 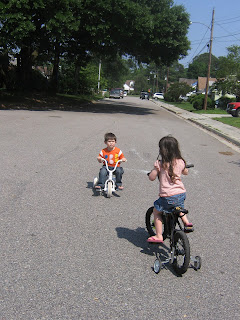 His try on the big bike. Because he can only pedal backwards, and this bike has brakes, he doesn't go anywhere...but he really likes the colours of it! 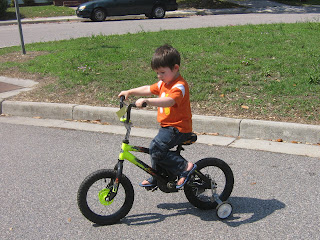 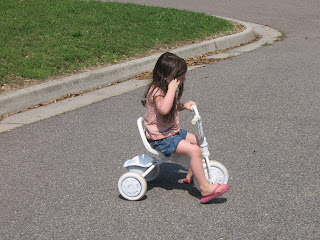