Well, I guess it was inevitable - so many people interacting, with so many kids, in confined spaces - I think we created a Super Virus! I think for all the people traveling from the East, the lack of sleep in our travel delays just didn't help us, in keeping us well. Pretty much every single person was affected to some degree or another either while there, or right after leaving. Brooks experienced a first, REAL medicine! At the age of almost nine years old, Brooks had never had a prescription before! He's been sick, especially when little, but it just never progressed into anything like a ear infection or whathaveyou. He blames that on the honey, garlic, cayenne pepper mixture I used to make him eat when he was sick (he's super glad I've switched to oils, hah!). Well this time, I noticed some spots in his throat, and sure enough, it was "something", we did a walk in clinic, and they didn't bother to swab and culture for a specific diagnosis - strep or tonsillitis were both possibilities I guess, and both cured with the same medicine, so it really doesn't matter what it was.

And now we know that he is NOT allergic to penicillin! LOL. Took a few years longer than most, but we finally found out! :-) Thankfully once he started with the meds, he rebounded quickly. 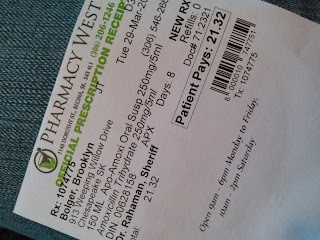