A Tale of Two Cats

Our kitties! I guess I've never yet really told the story of the cats, so here goes! Huck Finn was found and captured in late June. He was probably around 6 weeks old (best vet guess), and was caught living in "the wild", also known as the industrial area where Brian's office is. One of his co-workers had a passion for these cats, and didn't want to see them all die, so she tried to catch them - but can't keep them due to the fact that she already has older cats that would not love their new friends. Brian surprised us all (yes, even me), by bringing Huck home with no warning. He texted me on his way home, and told me to come to the garage for a surprise:-) The videos of showing the kids their new pet is here.
When we left for Canada, another kitten was caught (supposedly a brother, though they are exact opposites in every way). Brian brought him home, and didn't tell us. When we got home, he was still pretty wild, and stayed hidden - for an entire day, we were home, and I had no idea he was even in the house.
Brian called me from work "uh, just to let you know there is another cat in the house" WHAT?! He thought maybe the cat would come out while he was there with us, and surprise us, but the cat stayed away. There is a cat in here??! So the search began. We found the cat, who was lightning fast and terrified of us. We named him Tom Sawyer, as Huckleberry Finn's best friend. It took about a week to get him used to us. Since he was much older when we got him, he was much more wild than little Huck had been.
Huck has soft, silky, long hair, and crazy long bushy tail. Sawyer is of a smaller build and has short smooth hair, that bristles if you rub it the wrong way.
I have never owned a cat before outside of a brief time when I was about 6...so...of course I don't remember anything about it. Since we got these cats unexpectedly, you could say that I am totally not an educated pet owner. I literally wandered the pet aisle looking at the things they sell, and wondering which ones I needed:-)

And this totally happened at the vets:

Vet Tech: Would you like us to test for feline HIV?
Me: Uh...oh, I...what?...iiiisssss that a thing? Do people do that?
Vet Tech: Well, usually we test for it when they are rescued from the streets
Me: Oh! Ok! Well, I guess we should then? Um, go ahead.
Vet Tech: It's ok, we just take a bit of blood, it only takes a minute

**I totally don't care about that, I do totally care that I am now suddenly aware that there is a thing called feline HIV. I have *never* heard of feline HIV in my life. How do they get that? Sharing dirty needles? My mind is blown.**

Thankfully, both cats are HIV-free. I don't even know what would happen if they weren't. So weird. I still need to google it and find out the details on this.

It's amazing to see how much they've grown. When we got Huck he was only 1 lb, now he's over 5lbs! Huck is silent and stealthy. I've heard that apparently kittens learn to meow from their mothers, and since he wasn't with her long, maybe he never learned? He purrs but makes no other sounds.

Sawyer on the other hand, never stops "talking" - he is so vocal about everything, it's really funny. He has talking sounds, growling sounds, and everything in between. 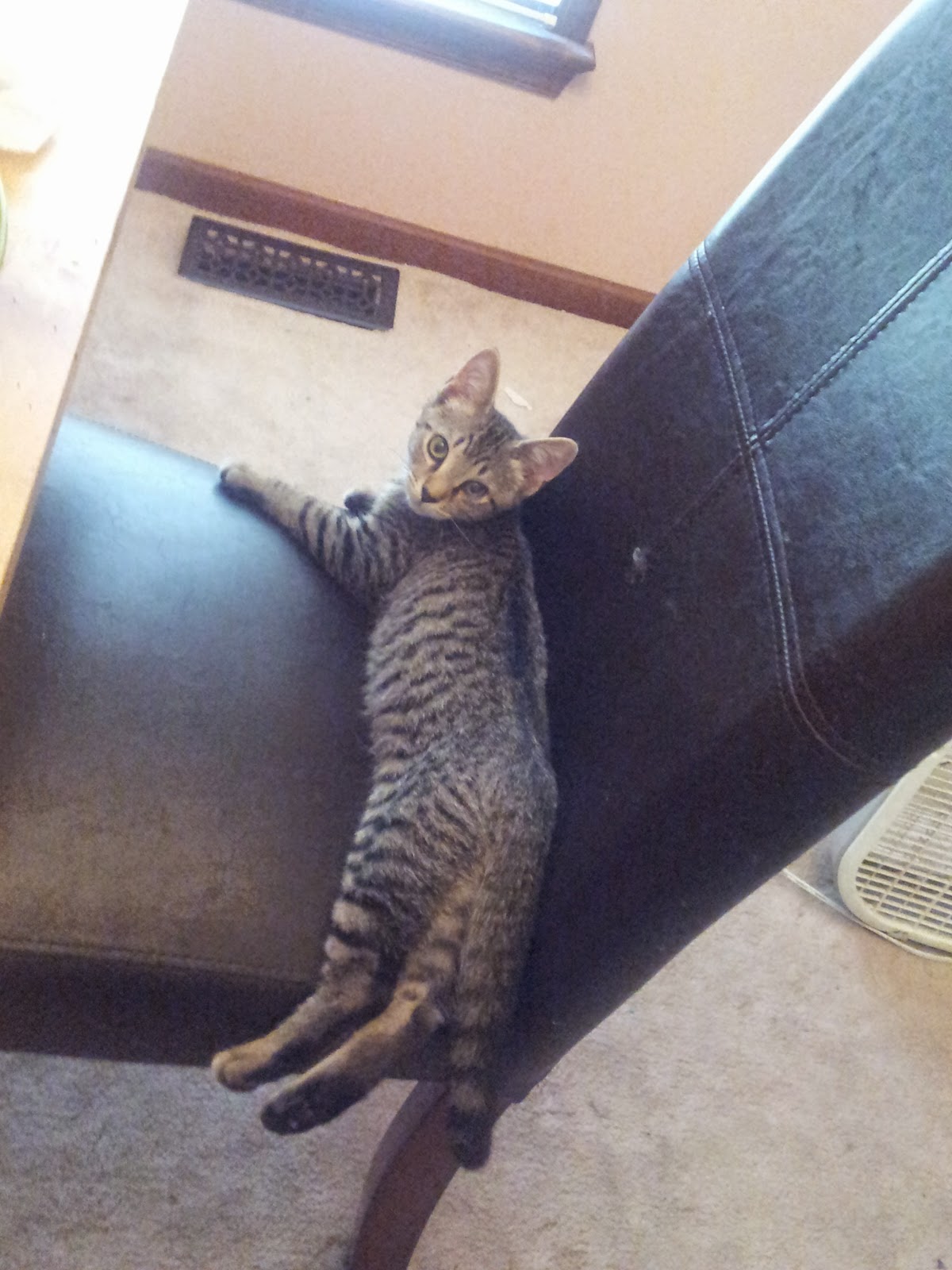 The kids adore the cats, to the point of being a little crazy. Talk about doting "parents" - they worry about every little thing. Do they like their food? (yes). Maybe they need more toys (they don't). Maybe they want to go outside (no). If we leave the bathroom door open they will drown in the toilet (no they won't).
It took Huck a little while to get used to Sawyer. He didn't seem to enjoy the company at first. For awhile - to get Sawyer used to us, we kept him trapped in our room, so we could easily go in and play with him. Well, after we started letting Sawyer have the run of the house - Huck seemed to want to reclaim his territory - our bed. Or maybe even reclaim his people - me.

Early one morning - probably around 6:30 - some kid came and opened my bedroom door. Huck ran in like a shot, jumped up on the bed - and PEED ON ME. Talk about bolting out of bed!

I googled a few solutions to the issue, and we seem to have that solved. Thankfully! They get along great now, and will be neutered in Nov when they are old enough.

One of the kids biggest complaints - getting woken up in the mornings by the kitties, wanting to play. They have their feet attacked relentlessly, until they get up:-) We love to watch them chase other and wrestle. I am personally loving the low-level of obligation, responsibility wise. I don't have time to be walking a dog and stuff. The cats give us just the right amount of fun and affection, without being too needy!
Posted by Darla at 10:13 AM