It will be Brooks' birthday in a few days! He has the age right "2", but still only puts up one finger. Here are some pre-birthday cupcakes to celebrate with his class on Wed night at church. He was very excited. He graduated up to that class a few weeks ago, just a little early. The nursery is full of actual babies at this point, and all his friends were already in the 2 & 3 class, so he was feeling very left out. Didn't help that Kenna would announce that he could "go to his baby class now", he would cry and say "Noooo. I a bee-boy (big)". The nursery workers would always throw him over to the other side so he could do story time...and so we decided it was time to make the switch! He adores his new class and his crafts.

I ran out of regular cupcake papers...so I had to make a few star shaped ones. Thankfully there were no fights. We made these 'white' cupcakes 'blue', for boys. They turned out rather greenish instead of blue, but it was close. 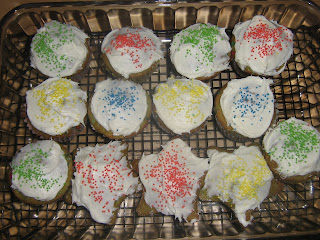