Attack of the Sushi

Yesterday we got all ready to feed the fish, we were ready and excited with food in hand, as we approached the fish bowl, I see this: 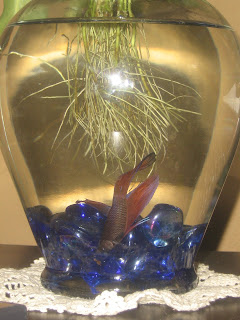 It does sort of appear that the fish is simply swimming upside down or something in this picture...but he is not moving a single gill, and is essentially trapped between a couple rocks and the edge of the vase. I almost had a heart attack! We've only had him three days and he's dead!! I panicked just a little...ummmm...maybe we'll wait to feed him kids....I tapped on the glass - no movement at all...yah, lets wait until Daddy gets home...Why Mom? Is he dead? She's far too perceptive, in my opinion! I tapped the glass again and nothing. Grrrreat! We were turning to leave him and suddenly he flutters his "tail" and kind of wiggles a bit and starts swimming around. YIKES. My poor heart was literally pounding. I really have no idea why, other than the thought of having to personally save him by untrapping him petrified me. A note another time about my extreme and irrational fears of birds, fish and many other creatures.

Brian laughed at me when he got home. Later that night, there was the fish, "trapped" again. Brian did acknowlegde that yes, he really does look dead and stuck. Again today the fish is doing it so I took a picture of it. I think we have a fish with tunneling insincts:-)
Posted by Darla at 11:05 AM