This rocking chair was a gift to Kenna from my Grandma Shantz. It was given to my Grandma in the early 1930's by her grandmother, Louisa Hamacher (I might have the first name wrong?). Apparently the story is this: The Hamachers sold their farming items and various goods at the local farmers market. A customer ran up a debt of 75 cents (a lot of money in those days), which she was unable to pay, so she settled her debt with this rocking chair. Since I am the first grandchild on the Shantz side, and Kenna is the first great-grandchild, Grandma decided to give it to her. I guess I will have to save it for Kenna's 1st grandchild (oh my!)

Brooks can make it rock now! 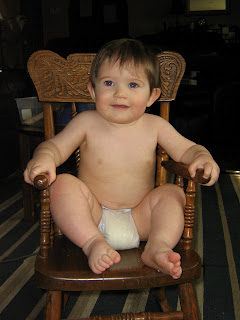 He can also "surf"! Surfing on the chair is actually a punishable offense, as it's dangerous, and could hurt the chair (although it's pretty sturdy, don't tell him that). Kenna has rarely, if ever tried to stand/surf in it. He is getting to be quite the daredevil! 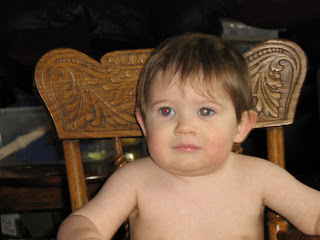