Brian went to the eye doctor recently, as he'd been noticing something a little off with his vision. Interestingly, the appointment showed all kinds of issues, and makes me feel guilty for not making him go YEARS ago. I go all the time, but never really thought about making him go as a routine, since he claimed to have great vision.

Well, issue #1 - He had a lazy eye as a young child and had surgery to correct it, which caused a double vision/eye cancelling the other out situation. So he's always had bad depth perception etc. Guess what?! It's called Diplopia, and they can fix that!! The Doctor cautioned that although it's possible to fix it with corrective prism lenses, it might not be possible for his brain to make the adjustment, after 36 years of doing this "this way" even though it's wrong. But it's definitely worth trying, and the doctor noticed eye fatigue in his right eye from over use (dominant eye taking the brunt of the work). So, gonna give that a shot! If it works, it will correct the double vision, his "head tilt", and his posture, due to the head tilt thing - (He always has his head to one side, and can't tell when it's straight).

Then, he also has a slight prescription needed in his right eye.

Then, the doctor noticed that he has a thin optic nerve leading to the right eye compared to "normal", but the muscles surrounding it are larger than "normal". This is something the doctor said he was likely born with, but it could be something of an issue and has to be monitored over time for changes.

The double vision correction cannot be done with contacts - so glasses!!

If this works, he'll need to wear glasses all the time, so we're going to get him a few pairs. These were some of the frontrunners, and we ordered only one pair to start off - I'll keep which ones a surprise, but you can take your guesses! If his brain is able to make the adjustments to seeing normally, then we'll go ahead and get a different style frame for another look/backup pair. 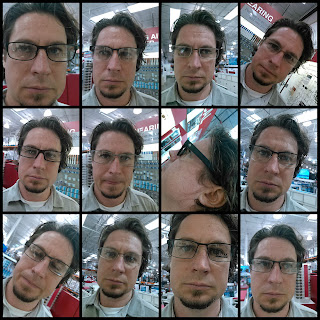